You are here: Home / A Talking Cat / You Look Terrible

Things are getting tense at the Phris house. That’s Phil and Chris put together. Try and keep up, okay? Obviously, this blog moves at lightning speed.

Phil walks in the door, which causes Chris to remark “you look terrible.” I’d like to think that Chris says this every time he sees Phil, not just when he’s sweaty. The image below is how Phil should have reacted. 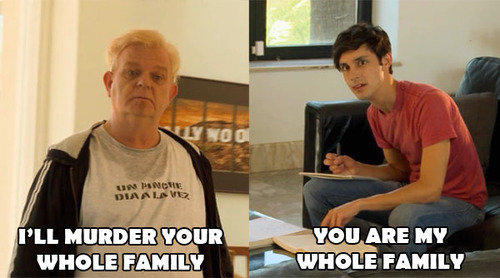 Instead, Phil takes insults from his son with a dopey and ignorant smile. It’s like insulting a brick wall with bad hair. Nothing gets to it.

You know, we haven’t talked about how gay Chris is. I mean, he is gay. I know the plot is that Chris likes Frannie, but Chris is gay. This isn’t an insult, because being gay isn’t insulting, but it is a fact. Is this poor directing, poor acting, or both? I’d much sooner believe that Harvey Fierstein likes girls than Chris. In fact, Duffy’s universe ending scare mouth is more believable than Chris’s motivations.

This is an issue because Chris wants to learn how to swim to impress girls. That’s his plot line. A plot line that his cutoff jean shorts directly conflict with. So that’s item 4,047 that is wrong with A Talking Cat!?!

Anywhooooooo, Chris says “girls are weird.” Phil agrees and says more things about girls. Because bonding. Phil and Chris exchange 6 lines about girls and Phil comes away thinking it was a positive exchange that moved their relationship forward. And, as all conversations between Chris and Phil end, they decide to get food of some sort. This time, it’s Chinese. That’s as good a place as any to stop talking.