You are here: Home / Archives for trent 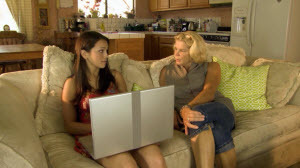 On to the current scene, which finds Tina and her mother named…something…being horrible to each other and everyone around them. Tina! Great idea! Why don’t you take an internship with the people mommy is running a catering event for?

According to A Talking Cat!?!, here’s how you run a catering business.

Oh, and sit on the couch a lot and yell at your kids and never actually be at the venue you’re catering for.

Today, we will focus on the “sitting on the couch and yelling at your kids” portion of this success equation. Susan called Tina jaded because she doesn’t want to work at a toy company.

Boy, this movie is full of tips. Parents, want to relate to your kids? Call them jaded! It will only make your relationship stronger!

Anywho, Tina just knows what she wants, “unlike some people.” This is a dig at her brother Trent, who ISN’T EVEN IN THE ROOM. He’s not even there! Quit being a horrible human being! 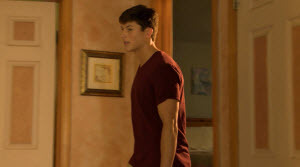 If there is one thing A Talking Cat!?! excels in, it’s showing people enter and exit a scene. Trent will NOT let this “unlike some people” comment stand. In he rushes!

Hold up, Trent! Great idea! Why don’t you take the internship? “How much does it pay,” he asks. “I don’t know,” says Susan. “Goofus,” says Tina. “No, you’re the Goofus, actually,” says Susan.

WHAT IS HAPPENING? What are you even saying or talking about? Is this how human beings talk? Quit being assholes for two seconds!

Now, before you totally get behind the trodden upon Trent, he spouts this gem:

Besides, toys and stuff is for people with imaginations and creative type stuff.

Trent is a man out of place in A Talking Cat!?! He’s a sensitive boy who likes to go for long walks and is handy around the house. He’s basically a generic dating profile. He also has a slamming body. What? David DeCoteau doesn’t cast guys unless they look good with their shirts off. 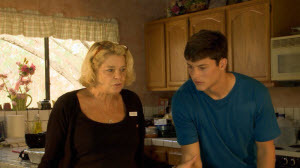 Our introduction to Trent goes like this. He enters from screen right, leans over his sister menacingly, and growls “stop bugging mom about business college.” Trent sounds like a bully, but really he’s stuck in a horrible situation with a wretched mother and a wicked sister. Something about this sounds familiar. Oh well.

Mom stands by, concerned about her shoes (really), as this exchange happens.

Tina: Why don’t you shut it?
Trent: Why don’t YOU shut it, you’re the annoying one.
Tina: No, you’re the one who doesn’t even know what he’s going to do with his life. At least I have direction and purpose.
Trent: And if only you had a personality, you might have a future.
Tina: I hate you Trent.
Trent: Ditto.

MOTY: Can you guys give it a rest and help me find my shoes or I won’t feed you for a week.

Whoops, sorry I asked you to say something, mom. You were woefully unprepared to speak. Sorry I put you in a tough spot. This one is my fault.

Remember when you felt sorry for Tina because she couldn’t go to business college? That was 10 seconds ago. Now she’s the awful girl who dresses down her brother in front of an uncaring and self-absorbed mother.

When you think about it, what makes more sense? That TWO people on one movie did a horrible job, or a cat is giving a sales presentation? Occam’s razor, my friends. That cat is most definitely in the middle of a PowerPoint deck. 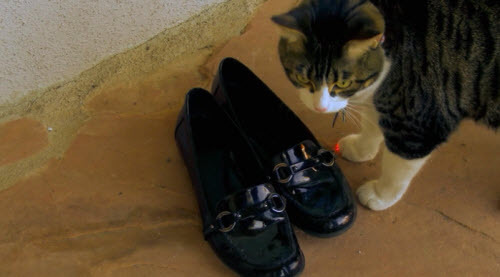