After squinting at houses on Google maps and looking at houses available for filming locations, I did a search for “vw bug couch malibu, ca” and BAM, first result.

Here is an excerpt from their estate sale listing.

“We are selling the contents of a 7,000 sq. ft home in the hills of Malibu. This beautiful home has so many interesting pieces! VW Bug Seating, Unique Art, Mid-century Furniture, Modern Furniture, we have Theatre Seating, a Ms. Pacman machine, Ben & Jerry’s original 1986 cow cut-out artwork, Fabulous Rugs, plus tools, books, camping and sports equipment, an entire gym for sale. We even have a Lotus engine turned coffee table!!! So much great stuff! And because we know it’s a bit of a drive for you, our prices are even better than normal!!”

Come on A Talking Cat!?! and estate sale listing! Quit using up all the exclamation points! Other people need them too.

Also of note. The home from A Talking Cat!?! where Phil and Chris live has 7 bedrooms and 7 bathrooms. That’s 5 extra of everything. They could change their rooms like day-of-the-week underwear.

Makes me think of the H. H. Holmes’s Murder Castle. Phil and Chris must have started their own little murder castle in Malibu. 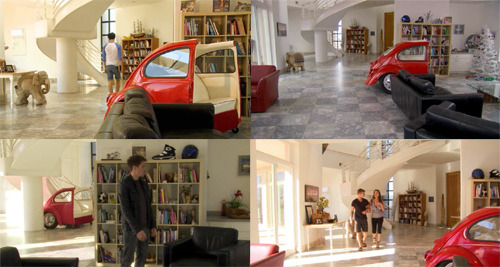 It’s time to play “Guess That Movie!” The stills above are from four different movies. One of them is A Talking Cat!?! Can you guess the other three and label them correctly?