You are here: Home / A Talking Cat / Wasting Your Time!?!: The Movie

A Talking Cat!?! was specifically made to waste your time. Not just in an “OMG LOL I can’t believe we’re watching this bad movie” sort of way but in every way possible. Here is all the dialogue from the riveting “Did We Get A Cat” scene.

Nine lines in the entire scene.

Number one, what the hell kind of fractured language do these people speak? Pick a topic and stick to it! Girls, pizzas, cats. Something!

Secondly, and most importantly, this scene lasts 30 seconds longer than a 9 line scene should. To open the scene, Phil strolls aimlessly through his unnecessarily large home with an expression of loss on his face.

Hmm. The scene is still running about 20 seconds short. You know, the audience is too dumb to figure out how people get from one place to another. We had better show Chris descend the stairs. 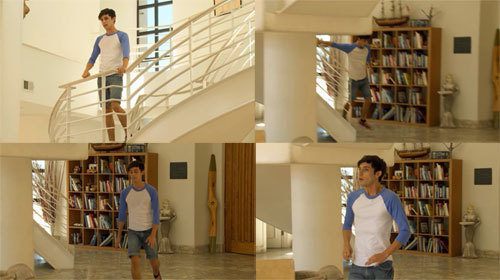 What have we learned from this scene? Girls and cats are trumped by pizza, and this movie will end up being 50 minutes longer than it needs to be.

I’ll understand if you need to take some time to process this all. This has been a harrowing 39 seconds of film.