You are here: Home / A Talking Cat / The Actors: Johnny Whitaker

The first non-cat character to appear in the talking-cat-centric movie A Talking Cat!?! is Johnny Whitaker. If you haven’t heard that name in a while (or ever), that’s because Johnny’s last big gig was in 1973 on Sigmund and the Sea Monsters. 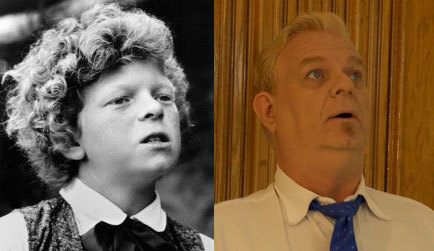 The years, especially 30 of them, aren’t kind to anybody. For instance, I was a much more attractive 3-year-old. All dimples and a spirit that hadn’t been crushed by the weight of the world. However, Johnny’s acting chops seem to be stuck in a state of arrested development.

Actually, that’s an unfair statement. I’ve never seen Sigmund and the Sea Monsters. But people tend to get better at things the more they do it. If you think about it, I’m being generous in stating that his acting has stayed at the same level. Because if it hasn’t, that means he was worse in Sigmund and the Sea Monsters than A Talking Cat!?! and my brain can’t handle that possibility.

Johnny Whitaker plays the character of Phil, a man who finds himself retired and lost in the frightening sea of unlimited time and possibilities. On the script, Phil’s character description reads something like “Phil did something with website and now he sold website and has more money than he had before from website.”

Phil will use his spare time to walk from one end of his giant foyer to the other, embarrass his teenage son, stalk a neighbor, and talk to a cat. Not sure how you prepare for a role like this, but it can probably be accomplished by going to the gym and staring at people working out.

Will Phil finally connect with his teenage son? Will all his stalking pay off? Will he ever find a replacement for website that he loved so much? Will he feed a strange cat a mixture of milk and tuna? Stay tuned to find out.

But, actually, yes to all those questions.