You are here: Home / A Talking Cat / Jazzy Nature Interlude

Phil 2.0 is off for a walk in the woods, to clear his head. This is followed by 35 seconds (yes, I timed it) of slow, shaky, panning shots of nature. This is scored by the same jazzy track from the beginning of A Talking Cat!?!, where they slowly and shakily panned over nature for more than 35 seconds. Guess the producers ran out of songs in the public domain. And cameramen that weren’t having nicotine fits. 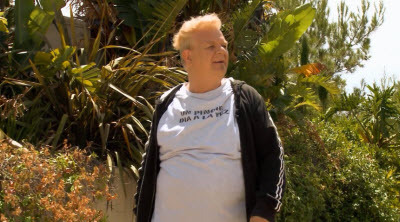 Phil’s idea of “a walk in the woods” is meandering by the palm trees at his neighbor’s house. All this time living in his home and he never thought to sneak into his neighbor’s backyard and skulk around. Soon he’ll become lost, pee in the birdbath, and fall asleep on their patio. Being retired sounds great.

This update feels a little short. I’d combine this with the next scene, but I love it too much to cram it in here. You guys, it’s so good. Wait until you read about it!