Writer and director David Mamet scripts dialogue in a clipped, fast-paced, and natural style. Actors should be able to give a fairly good performance by simply reading the words he has written. The pauses and cadence are in the writing.

Here is an example of the dialogue in A Talking Cat!?!

Did I mention that David Mamet is known for his wit? That’s also kinda necessary when crafting dialogue. What the hell kind of sense does the above dialogue make? A duck stuffed into a French press would make more sense.

So Girl calls up Chris and needs help with English. Girl never introduces herself. She doesn’t mention her name once.

Let’s go through some of the logistics here. We know Chris is doing his summer reading, which indicates that it is summer. We know Chris WAS in Mr. Garvey’s class. So we’ll assume Chris did well and completed the class since Mr. Garvey is recommending him as a tutor to Girl.

Chris is very flustered by Girl, as indicated by his frantic conversation. So Chris knows who Girl is. And since Girl will be taking Mr. Garvey’s class, and this is summer, Girl must be in a lower grade than Chris.

Why would Chris have any idea who this is? Introduce your stupid self, is what I’m trying to get at here. Sure, there are bigger flaws in this movie. But even the little things make absolutely no sense!

And we have a goddamn talking cat coming up. A cat that talks to people. Just because we suspend our disbelief for a talking cat doesn’t mean you can coast through the rest of the movie assuming we are on board!

ANYWAY! The phone call ends and Chris berates himself by saying, “I’m so lame. What in the world am I going to do? Frannie, she is going to be here tomorrow.”

Frannie. How does he know who this is? Why is this the first time we hear her name? This is not how people talk. Not even to themselves. “Frannie, she is going to be here tomorrow.” Thanks for the last minute exposition, jackass.

Oh, but hold up. Drop everything! There’s a cat in the house! That’s the most incredible thing Chris has ever seen! He needs to check this out right now! 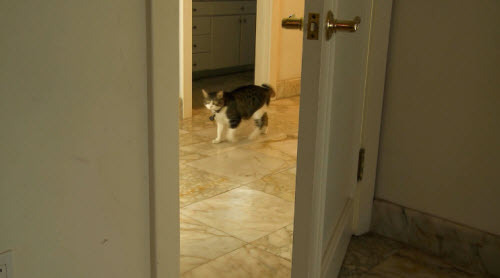