You are here: Home / A Talking Cat / Titular

David Attenborough could have saved A Talking Cat!?! If he had played Duffy, the talking cat, instead of Eric Roberts, his awestruck delivery would have made every line important. Especially the lines where Duffy is talking about nature and beeping machines. 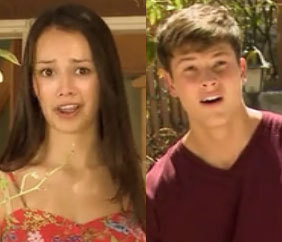 But, alas, we are stuck with Eric Roberts. Luckily, horrible Tina is going to say “a talking cat” too! Right now! In this scene!

Tina is a horrible person who is too smart for business college and Trent is a big dummy. Yet smart ol’ Tina accuses big dumb Trent of perpetrating a hoax. She thinks Trent made Duffy talk. So who is the real dummy here? The answer is everyone in this movie. And everyone watching this movie.

Obviously, they were thinking it was stupid before now.

Anywho, Trent is super confused by Tina’s accusations. He’s trying to mend a fence here. He can’t mend and be yelled at, at the same time. Also, sleeping and dreaming are tough for Trent too. He needs to do them both separately.

Tina storms inside, where mommy Susan accuses her of scaring the cat away by slamming doors. No doors were slammed. Susan is simply a terrible mother and will lie to make her children feel bad. Tina continues to storm all the way to her room.

And now, to further cement the idea that Tina is just as dumb as everyone else, we are treated to the lengthy “reading is hard” scene. The Little Spanish Flea and timecode in the clip below were added by me, of course. A little Spanish flea? That’s just stupid!