You are here: Home / A Talking Cat / Swimming 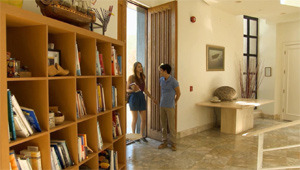 The next scene in our journey through A Talking Cat!?! starts with Chris opening the front door…wait a second. How did Chris get downstairs? I didn’t see him go down the stairs after he went up. The director can’t leave simple minded people like us to make assumptions about getting from one place to another.

What was I saying? Oh yeah, Chris comes through the front door with phone girl, who he is going to tutor. Boy, I hope they have a conversation about how he got downstairs from upstairs or I’m going to be totally lost.

Tutored phone girl (Tina or Frannie or something) starts by complementing Chris’s house. Because she’s poor. We didn’t cover that earlier, but she can’t pay Chris much for tutoring because she’s poor. And dumb. So she gawks at his house.

Chris says “follow me, we’ll go outside” and leads Girl outside. Lucky for us, they show all 10 seconds of “going outside” action so we don’t get confused, like with that whole upstairs/downstairs thing. Damn, that’s going to bug me. I wonder what happened.

More compliments about the house. Then Chris ushers Girl past their study table to stand in the middle of his patio. Why wouldn’t you stop at the place you’re going to? Because we need to establish another subplot.

But before we get to that, Girl sees Duffy (the talking cat who hasn’t talked yet). “Is that your cat,” she asks? Chris says “no” like she’s stupid for even asking. Without missing a beat, because she is dumb and poor(?), Girl says she likes cats. This causes the lecherous sound of Eric Roberts’s voice to say “cats like you too.”

Oh, right. There are multiple subplots with Girl. Number one, she has trouble “reading…books.” Her words. But she’s also in honors classes. So she’s actually dumb? She’s acting dumb? She wants to get close to Chris? She’s a gold digger? It never becomes clear. But there is one thing that’s very clear. 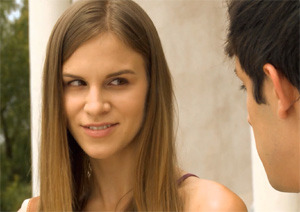 Girl states she doesn’t read. Multiple times. In different ways. But maybe they can make tutoring fun! How? Chris can tell her about the books while she swims in his pool.

And now, the Pandora’s Box of swimming has been opened. From here on out, Girl will never stop talking about swimming. She is very concerned about the pool going to waste. Because you can waste a pool?

This conversation about swimming makes Chris very uncomfortable, so he grabs Girl’s summer reading list and runs away. He doesn’t stop at their study table to take a look at the reading list. Oh no. He runs and hides in his room, leaving Girl alone on the patio.

Wait a second. Isn’t Chris’s room upstairs? Oh God, how did he GET there? C’mon, movie! Either show all the stairs or none of the stairs!