You are here: Home / A Talking Cat / Enter La Cucaracha 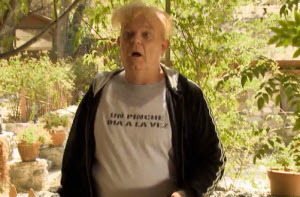 “La Cucaracha” is Spanish for “the cockroach.” Sure, a soulless version of “La Cucaracha” is the backing music to this scene because it’s in the public domain. But imagine for a moment that Samsa from The Metamorphosis turned into Phil, not a cockroach. Sweaty, messy, melty faced Phil. The story would be about equally horrific, don’t you think? His mother would faint and then he’d scuttle around the ceiling for a while. 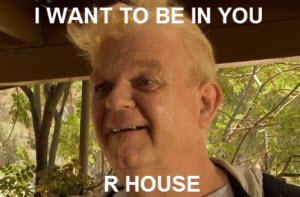 Anyway, Phil is walking in the “woods” and forgot to bring water. Because he’s a retired genius. So the Frankenstein’s-monster-on-a-bad-day that is Phil stumbles up to a random house to ask for some water. When someone with the same distinguishing features as a half-filled water balloon looking for the sweet release of death shows up on my doorstep, I let them in! In that way, I can relate to horrible mother Susan because she lets the walking-dog-bed-that-hasn’t-been-washed-for-five-years into her home for a glass of water.

In terrible Susan’s defense, she asks Phil if he is a crazy person. Because, like the police, they have to tell you. Otherwise, it’s crazy person entrapment and you’ll never get a conviction.

Susan proceeds to give Phil the smallest amount of water possible. But Phil is all, like, “Thanks for the tiny glass of water, but now it’s more water. I’m magic. What up now?” 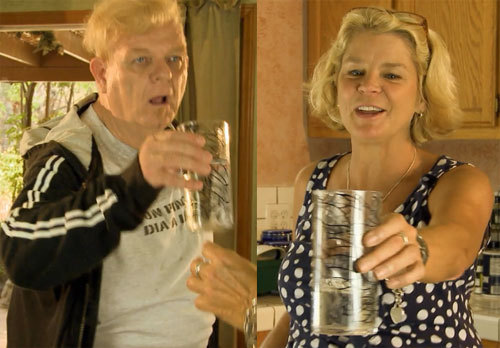 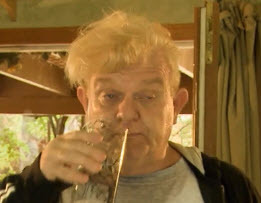 Phil doesn’t actually say that. Instead, he slurps the water down like a vacuum sucks up Legos. Loudly. Then he brings up his son for the second time, to which Susan replies “oh, you have a son?” This is the second time he mentioned it, Susan! You’re the worst! You need to work on your listening skills or admit that you finally need to get that hearing aid.

It should be noted that all the parents in David DeCoteau’s “family” films are single parents. If this is due to budget restrictions, because he’s lazy, or because he’s a real Murphy Brown fan, it’s hard to say. Sure, he might be making a statement. But so far, that statement is “single parents don’t listen to you and consume the attention of their children.”

By the way, Duffy (the talking cat!?!) is sitting on a couch listening to all this. Creeper!

This might be the longest scene of dialogue (sad that I need to specify) in the entire film. Susan and Phil talk about not being married, home decor, children, and Humphrey Bogart. No one in this movie is a great actor (sorry, Eric Roberts), but Phil and Susan are by far the worst. Why they get the long scene about nothing is beyond me.

Actually, everything in this movie is beyond me. I can’t imagine anyone thinking any of the choices made in the production of this movie were a good idea. There isn’t one thing done well. Not one! This scene makes me hate A Talking Cat!?! Let’s just push past the rest of the scene, okay?

Fine. The scene ends with Duffy thinking “I am tooooo good.” Because he told Phil to take a walk in the “woods” and then this happened. Great job, cat. I can take credit for coincidences too. Scene over.